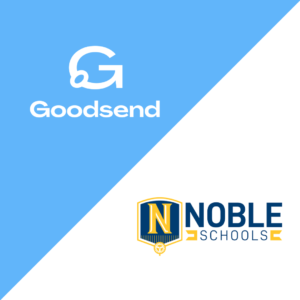 CHICAGO — Goodsend, a Chicago giving platform, and Noble Charter Schools, today announced that they will partner to offer Goodsend’s community-funded financial aid directly to Noble students and families. This allows students and families in need at each of Noble Schools’ 18 citywide campuses to apply for micro-grants from Goodsend’s growing network of Chicagoland donors, no strings attached.

HOW THE PARTNERSHIP WORKS

Starting today, students and families from Noble Schools’ 18 campuses citywide, can apply for a one-time micro-grant from the Goodsend network of local donors.

Goodsend has a consistent stream of funding that comes via monthly donations on its giving platforms:

When a Noble Schools student’s micro-grant request is approved, Goodsend pulls the funds from its’ pool of monthly donations and sends them as a one-time micro-grant directly to that student’s family, no strings attached. These micro-grants are generally a one-time payment between $100-$500 and are commonly used to cover emergency expenses such as utility bills, rent, healthcare costs, and more.

Goodsend’s giving platform allows local consumers, organizations, and shops to easily and consistently give directly to Chicago low-income students and families. In the past year, Goodsend has grown to a network of over 600 donors, that contribute an average of $5/month. They’ve facilitated over $32,000 in micro-grants directly to local community members in need.

In 2022, Goodsend has signed agreements with over 20 CPS schools, that allow each school to apply for micro-grants whenever they have a student and/or family in need of emergency assistance. Goodsend raises monthly donations from its local network of donors via its’ mobile donations app and a new tool for Chicagoland companies and shops, Giving Pages. The monthly donations are pooled together and then directly distributed as micro-grants to that month’s student recipients, with no strings attached.

Noble Charter Schools are a part of the CPS school system. Noble Schools serve more than 12,700 students across 18 campuses in Chicago and support more than 20,000 alumni. Noble Schools includes prestigious campuses such as Chicago Bulls College Prep, The Noble Academy, Pritzker College Prep, and more. The Noble Charter Schools network is one of the largest of its’ kind in the US and is recognized nationally for performance in college access and persistence.

Interested in learning more about Goodsend? Get in touch